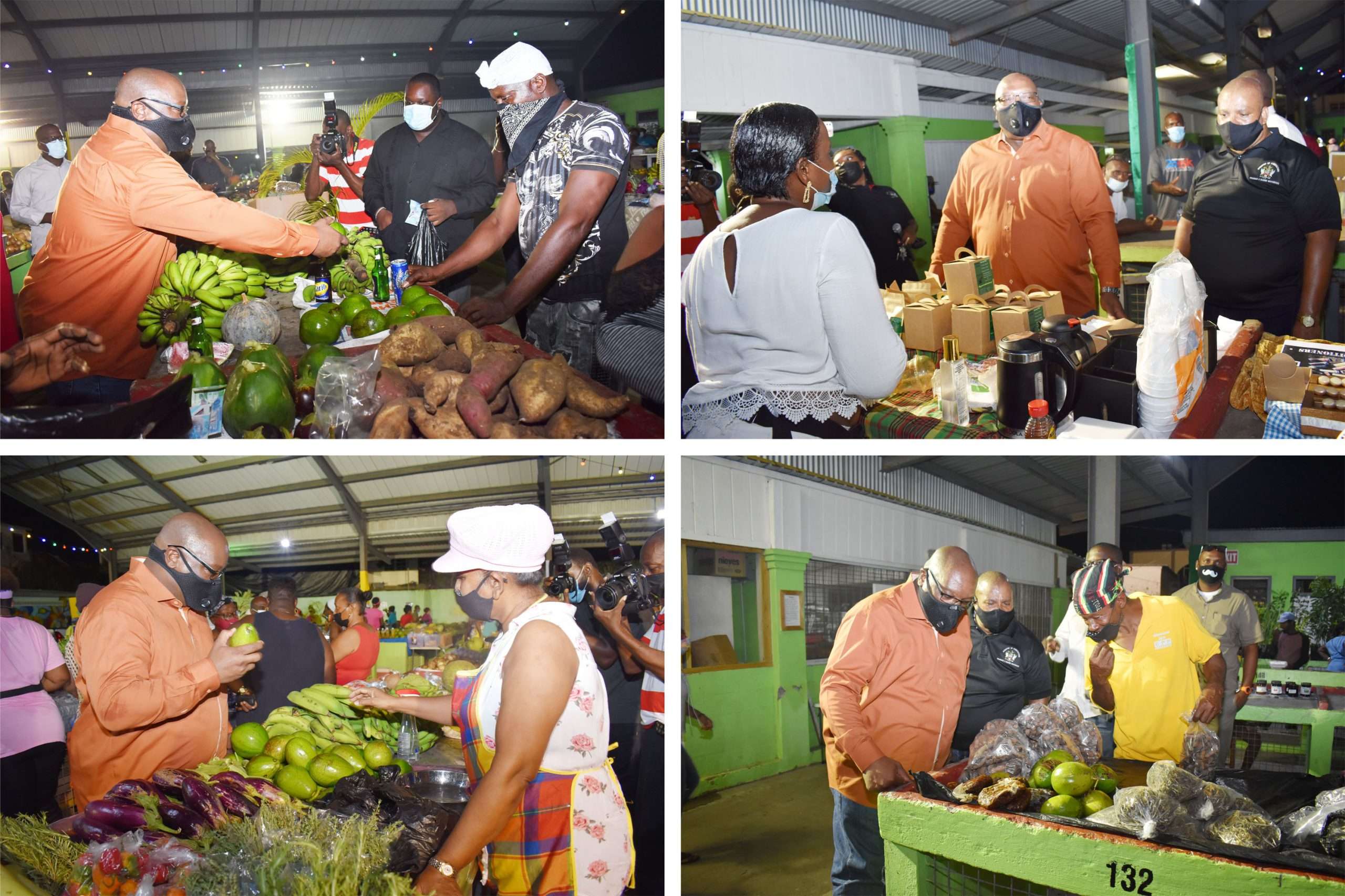 Hosted by the Department of Agriculture, Fisheries and Marine Resources, Permanent Secretary Mr Ron Dublin Collins said it was a success for the department as it had provided a forum for vendors, farmers and fishermen across the country to sell their products and present them to a wider buying audience and for them to have continued public support.

“The Prime Minister has always been very supportive of various activities and initiatives,” said the Permanent Secretary who was one of the officials accompanying Dr Harris on his visit to the various stands. Also in attendance were Director of Marine Resources Dr Marc Williams and Acting Director of Agriculture Dr Tracey Challenger-Walters.

According to Collins, Premier Harris provided considerable budget support to the ministry starting with a stimulus package that was later called the “farm support project,” and thanks to him, the ministry was able to support farmers.

“So it was no surprise to see his presence at the Independence Night Market,” said the permanent secretary. “He is passionate about the market and the new initiatives we are bringing to the market. “

The Independence Night Market had opened at 5:00 p.m. and people entering had their hands sanitized, temperature taken and their contacts recorded, after which they were given a ticket and advised to keep it safe as the numbers would have entered. a draw. and the lucky winners would receive attractive prizes on an hourly basis.

The first recipient was Ms. Annie Marsham of Half Way Tree, who received her award from the Permanent Secretary, Mr. Ron Dublin Collins.

The buzzing vibe of the market grew even stronger after Prime Minister Harris arrived shortly after 7:15 p.m. and stayed in the market for almost two hours as he moved from stall to stall and not just bought. to stand owners, but had a long discussion with them. .

Market stall owner Ms Sherrilyn Brandy, who has been selling on the street for over 25 years and recently moved to the Basseterre Public Market, said she sees more and more people coming to the market, this which means they become more health conscious by purchasing fresh produce. , what she said was a good thing.

“The night market was very good and we were very happy to have Premier Harris among our customers,” Ms. Brandy said. “Yes, he bought from me. He bought everyone and that’s a good thing. He gives us his support. I like the support he gives us and the fact that he stands up and listens to us. He just doesn’t buy – he gets up and whatever questions you have, he will answer them.

When the third lucky winner was announced, Prime Minister Harris was invited to present the award to the delighted winner – Ms. Mary DeSuza-Liburd.

“We have seen success stories from people who have talked about how they first connected with particular vendors and so on and continued that relationship,” said Permanent Secretary Mr. Ron Dublin. Collins. “We see for example the layout, its variety – we have fish, we have meat, we have had ready meals, we have had vegetables and fruit, and agro-processors of different types.”

The permanent secretary said the ministry has seen new agribusinesses come on board – those who make wine, cakes and some deal in hand sanitizers. He noted that they are adapting, as this year’s independence theme says they have to adapt as they move forward in the face of Covid.

“Overall, we think it was done well,” Collins said. “The committee has done a good job and we want to continue. We are looking forward to the December one now. It’s just part of a larger effort to improve agriculture that we’re about to launch into new strategic planning. We are on the right track to ensure that agriculture is better placed to contribute to the development of our country. “

Meanwhile, Director of Marine Resources Dr Marc Williams has said the Independence Night Market is a huge success, where many patrons come to support farmers and fishermen in St. Kitts and Nevis.

“We also saw the Premier come to support the fishing and farming community,” said Dr Williams. “For years he has shown a keen interest in fishing and farming. He has been Minister of Fisheries and Agriculture twice and you can now see in his role as Prime Minister that he has allocated a significant amount of funds for the growth and development of the sector. He mingled with customers tonight.

The Director of Marine Resources added: “We had a large amount of fishery products because you know that fish is one of the healthiest meats for people with noncommunicable diseases (NCDs). So we take that as a stepping stone and hope that the next time we have this event it will be bigger and better than what we see here tonight, but overall it has been a huge success. “