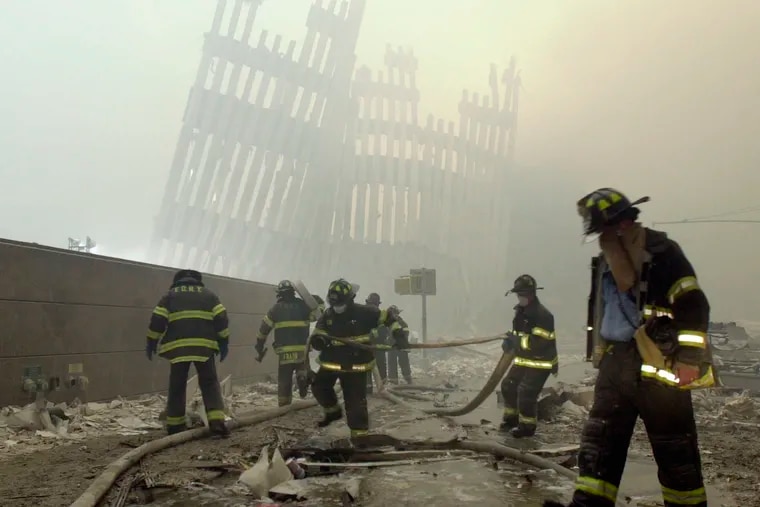 Smoke, debris and dust-covered pedestrians: recollections of an Inquirer reporter of 9/11

What do I remember September 11?

I heard KYW report the first strike as I drove to work.

Watching TV in The Inquirer newsroom as the second plane struck the World Trade Center.

Take my laptop and run to the 30th Street station.

I still feel a great sadness when I think about this day and the days to come. It may have been the greatest story I have ever covered as a journalist, but the things I remember most are the details, small and silent.

I’m on a northbound Amtrak, one of the last to leave Philadelphia. At each stop, passengers get off the train, fearing to go further. By the time we exit Princeton Junction there are only a handful of runners left in my car. Without a word, we walk to the windows and look east, towards Manhattan. We huddle around a man with a transistor radio, hearing that one tower has fallen, then the second.

Then we see it. Somewhere near New Brunswick, NJ, where the tracks curve and you can usually see the Twin Towers twinkling like Oz, we see a throbbing plume. There is silence. I turn away from the window and look at the passengers around me.

The train arrives as far as Newark. All tunnels and bridges to Manhattan are closed. I hitchhike to the edge of the Hudson River. A banker covered in dust as fine as talc descends from a tugboat that evacuates the survivors to Jersey City. He had reached the Battery Park esplanade when the first tower collapsed, enveloping it in debris and smoke. At Frank Sinatra Park in Hoboken, I look over the shoulder of an artist drawing hell across the river.

The owner of a small motorboat takes me to an Upper West Side marina. Dusk is approaching as I arrive downtown. Outside St. Vincent Hospital in Greenwich Village, nurses in wheelchairs stand by the sidewalk, waiting to transport survivors to the emergency room.

I watch them wait. And wait. Standing still.

The next morning at dawn, I take the metro downtown. As I get off I notice a group of tired firefighters across the track, waiting for the city A train. I hurry up and down the stairs to their platform and jump on the train to speak to the 10 men from Ladder 34 on the way back to Washington Heights. They spent the whole night searching the rubble for bodies. A stranger walks past the commander, slumped in a seat, and touches his shoulder, whispering, “I just want to thank you.”

I make my way to a downtown fire station, Ladder 24, the home port of one of the victims, Father Mychal Judge, the fire chaplain. A fire engine that had been at zero point is covered in a thick layer of death dust. I note the messages people have traced with their fingertips on the mutilated engine – little prayers for the dead – when I notice a woman turning around the corner of 31st Street and falling onto the stage. She stops short and covers her mouth, stifling her sobs.

In 2007, on the anniversary of September 11, I asked MaryAnn Marrocolo Tierney, former Philadelphia Emergency Manager, to tell me everything she could remember. In 2001, she worked in a building adjacent to the towers. In a video I made for The Inquirer, she methodically explained to me the horror of that day, adding an agonizing thought at the end: “People are starting to forget how horrible 9/11 was.

I remember. I will always remember.