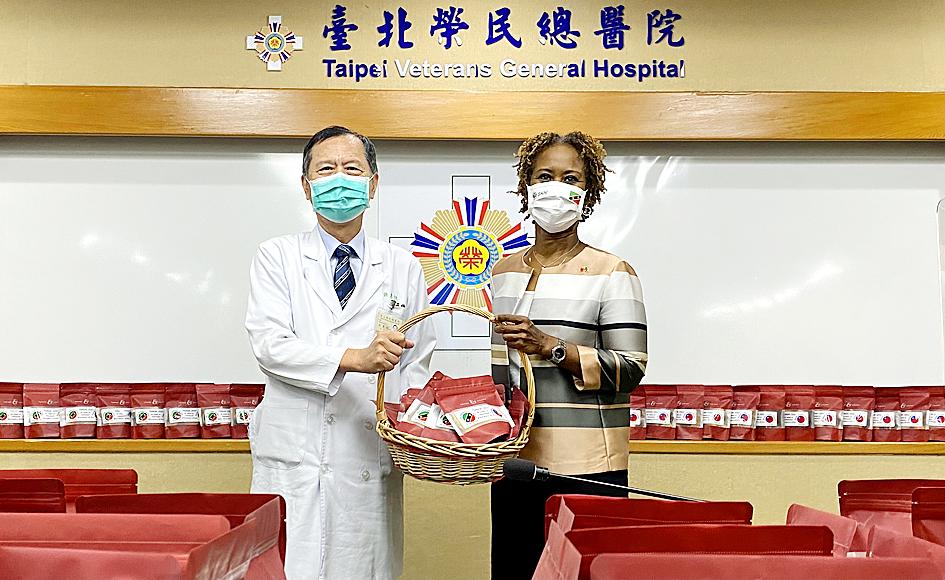 Saint Kitts and Nevis Ambassador to Taiwan Jasmine Huggins yesterday sent 138 bags of hand-made snacks to staff at the Taipei Veterans General Hospital, thanking them for helping the nation of Caribbean to protect public health and mark 38 years of diplomatic relations with Taiwan.

The hospital’s link with Saint Kitts and Nevis, one of Taiwan’s 15 diplomatic allies, stems from a collaborative project on the treatment of chronic kidney disease, supported by the International Cooperation and Development Fund .

Hospital director Wayne Sheu (許惠恒) said the two sides seek to deepen their cooperation through a follow-up project on the prevention and control of metabolic disorders, such as hypertension, obesity and diabetes.

Due to the COVID-19 pandemic, the hospital has designed online courses for medical staff in Saint Kitts and Nevis, he added.

“It’s better to give than to receive,” Huggins said, as she presented the snacks and masks bearing the country’s national emblem to management staff at the Tianmu Area Hospital (天母) in Taipei.

Calling workers “unsung heroes and heroines in the hospital,” Huggins said she hoped the gifts put a smile on their face.

Taiwan was the first country to establish diplomatic relations with Saint Kitts and Nevis after gaining independence on September 19, 1983, she said.

“Educational opportunities in Taiwan continue to attract our young people, many of whom have returned to the Federation. [of Saint Kitts and Nevis] with advanced training and skills, ”she said.

To mark St. Kitts and Nevis National Day, which took place on Sunday last week, its embassy is hosting a series of activities, including at Taipei’s Tianmu Baseball Stadium today where the Ambassador is due to launch the first pitch in a Wei Chuan Dragons baseball game. .

Comments will be moderated. Keep comments relevant to the article. Comments containing abusive and obscene language, personal attacks of any kind or promotion will be removed and the user banned. The final decision will be at the discretion of the Taipei Times.