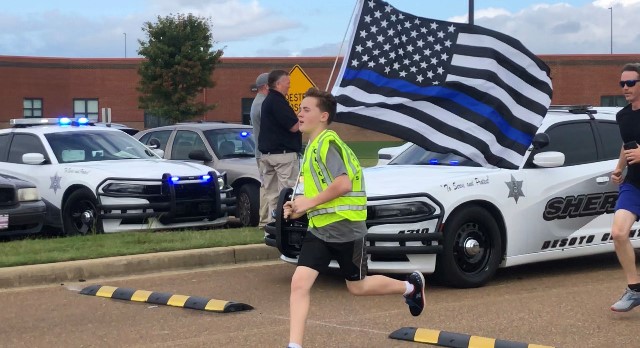 OLIVE BRANCH, Mississippi – Memphis Police Officer Darrell Adams died on Saturday when a passing 18-wheeled vehicle struck him as the 34-year-old was investigating a car crash along the ‘I-40.

Less than 24 hours later, nearly a dozen runners and walkers are helping preserve the memory of the 5-year veteran by participating in Running 4 Heroes, a one-mile race, in Olive Branch, MS.

Zechariah Cartledge, a pre-teen from Florida who was in town for another cause, led the way when he learned the 34-year-old officer had made the ultimate sacrifice.

With the pounding of the sidewalk, Cartledge runs in remembrance.

“We are here to honor a deceased Memphis Police Department officer who lost his life yesterday,” he said.

The Lewisburg High School parking lot in Olive Branch would become a course Cartledge would use to show his support.

MPD: Officer killed in accident on I-40

“I went to Grenada and did a mile in honor of all the Mississippi first responders who lost their lives across the state,” he said. “My goal was to run for every fallen police and firefighter across the United States and since I started I have traveled over 1,000 miles.”

This marks mile 1,022. It’s the equivalent of running from Olive Branch to Philadelphia.

Cartledge said that at every step, it is in honor of the first responders who have taken selfless action to serve and protect.

“We are very happy to see all the support for this race and I am very happy we were able to get it,” said Cartledge.

A family that includes other law enforcement agencies from Memphis to Mississippi. Some of them even run in uniform to honor a brother in blue.

While he’s been through a lot over the past 2 decades, something that never becomes easy for Memphis Police Sergeant Kevin Williams is hearing about the loss of a fellow officer.

He will deliver the flag to those close to Agent Adams.

Zechariah says he will continue to go the extra mile for first responders who make the ultimate sacrifice in an ongoing effort to run for the heroes – hence the name of his nonprofit.

Baha Mar will host the second edition of the “Baha Mar Cup”, a multi-day fundraising event for celebrities, on November 6, 2021