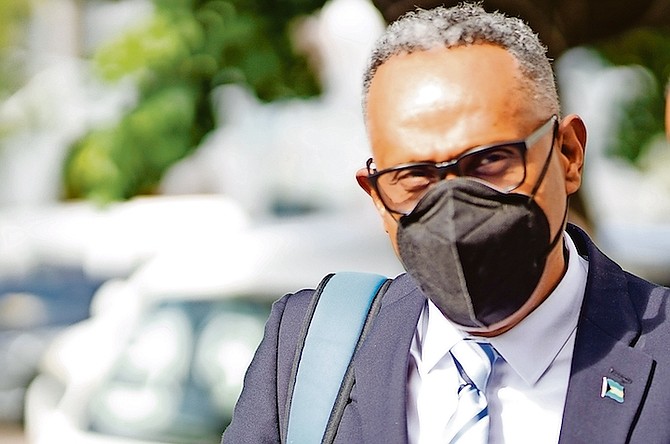 AFTER urging the government to implement more restrictive measures to reduce COVID-19, former Prime Minister Dr Hubert Minnis came under heavy fire from Minister of Health and Welfare Dr Michael Darville, who said his “mismanagement of the pandemic is common knowledge.”

Dr Darville said the Free National Movement should have worked actively to secure additional vaccine supplies before he was removed from his post in September and reminded the public that Dr Minnis called an early election in the “middle of the strongest ‘outbreak of COVID-19.

Dr Minnis told a local daily on Wednesday that the National Free Movement is concerned about the parties and other social events recently organized and the rising death toll from COVID-19. He called on the government to introduce more aggressive measures for the large gatherings currently taking place. Since taking office, the Davis administration has relaxed the nighttime curfew, pushing it to 11 p.m.

The FNM chief echoed sentiments previously expressed by former health minister Dr Duane Sands, reminding the public that the Bahamas has the highest obesity rate in the Caribbean and that in the presence of COVID, obesity has increased the hospitalization rate by 150% more than the normal rate.

While prime minister, Dr Minnis implemented emergency ordinances, which are still in effect, and several blocking periods. While Dr Minnis now criticizes the PLP government and makes suggestions on how to handle the pandemic, just before the general election, he relaxed restrictions to allow campaigning where there were many cases of large crowds, not social distancing and limited use of masks.

Dr Darville did not appreciate Dr Minnis’ criticism too much.

“The former prime minister’s comments in today’s Nassau Guardian on the COVID pandemic are arguably the most detailed response he has given to the people of the Bahamas in the past 18+ months since the start of the COVID pandemic, ”said Dr Darville. The gallery.

“It is interesting to note that as he seeks to find his political place and maintain relevance from the perspective of the FNM leadership struggle, he now seeks to engage the local media as he previously dealt with them. with little contempt.

“His mismanagement of the COVID pandemic is a matter of common knowledge. During his tenure, the Bahamas ranked second lowest in the world in handling the pandemic. “

Dr Minnis said that with the country’s vaccine supply low, death rates would remain high and hospital admissions would start to rise again.

Shortly after Dr Merceline Dahl-Regis, chair of the National Vaccine Advisory Committee, told The Tribune that the Bahamas was facing a rapid decline in supplies of COVID-19 vaccines, authorities at the Pan American Organization health officials have promised 57,300 doses will arrive in the first week of November. .

“And even though he now tries to oppose offering recommendations, his views still focus almost exclusively on restrictions,” he said continuing. “Let’s not forget that this is the same person who called an election amid the biggest increase in COVID cases in the Bahamas.

“Securing additional vaccines is something his government should have actively engaged in until election day. The fact that these vaccines are not yet on the island reflects the mismanagement of the pandemic by his government and not by the Davis administration which has been in power for just under a month.

“The Davis administration encourages healthy commentary from all sectors of the Bahamas in the fight against this pandemic, but discourages rhetoric aimed at settling personal scores and taking political positions.”