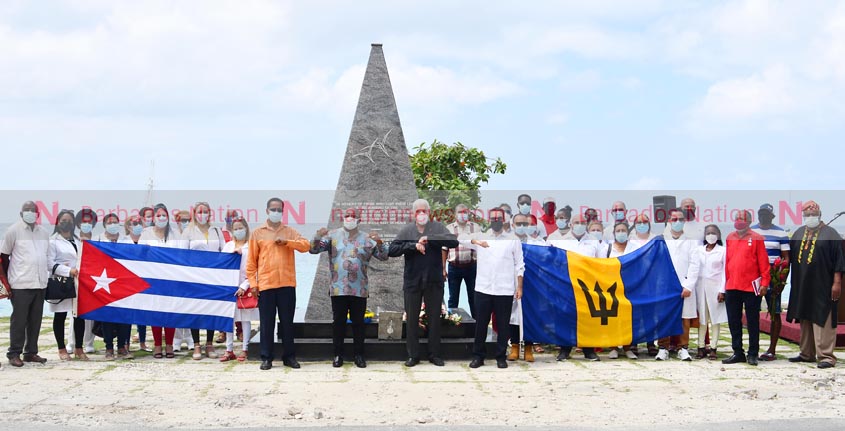 The victims of the 1976 Cubana Flight 455 bombing still need justice.

This point was reinforced on Wednesday at a memorial ceremony at the Cubana monument in Paynes Bay, St James, where the 45th anniversary of the air disaster was recognized.

While stressing that there was no way to bring back the 73 people (57 Cubans, 11 Guyanese and five North Koreans) who died due to the act of terrorism, the secretary general of the Caribbean Peace Movement and integration, David Denny, said their families still needed closure.

“We must therefore demand that the United States allow the inhabitants of this hemisphere to obtain some form of justice for this terrorist act which killed medical students from Guyana, a fencing team from Venezuela.

It is not just a day to come here and spend the day with speeches, we must seek justice for the deceased and their families who continued to suffer and to this day we still cannot close this book ”, Denny said.

On October 6, 1976, a few minutes after Cubana flight 455 left Seawell Airport, the bombs exploded and the plane landed just off Paynes Bay, near where the monument was erected. There were no survivors.

Two Venezuelans, Freddy Lugo and Hernan Ricardo Lozano were sentenced for planting the bomb. However, a former Central Intelligence Agency (CIA) agent is said to be the orchestrator of the attack.

MP Trevor Prescod, Cuban Ambassador Sergio Jorge Pastrana and members of the Cuban Medical Brigade Henry Reeve involved in the fight against COVID-19 in Barbados all attended the ceremony.

Before the bouquets of flowers were placed on the monument and thrown into the water, Pastrana stressed that too few people were aware of the tragedy and some of the controversial US foreign policies.

“A quarter of a century after October 6, 1976, four planes were used as bombs by terrorists in the United States and the date of September 11 has been engraved in the minds of all mankind as the time of the birth of the war on terrorism.

“But many did not know that this new war was only the offspring of state terrorism organized for years against the oppressed in the developing world, especially in Latin America and the Caribbean, Haiti, Cuba, Nicaragua, El Salvador, Granada, Brazil, Panama and so many others, ”said Pastrana.

He also spoke out against the ongoing US embargo against Cuba, which prevents US companies from doing business with Cuban interests.

“There are generations who have not heard of this event at all and it is surprising to learn that those who stole that day were mostly young people who were murdered by criminals who were protected. later by those in power in the United States who had been CIA agents. for years.

“What is also particularly shocking is that the current government of the same country that trained these criminals is now accusing Cuba of being a sponsor state of terrorism, and they are now using this innuendo to increase economic, financial and trade warfare. that has fought against Cuba for years, even in the midst of the pandemic that is killing millions of people, ”said Pastrana. (TG)