The highly transmissible Omicron variant of SARS-CoV-2 requires a more efficient approach to tracing contacts of confirmed cases, so the center would focus more on promoting the app, which notifies users when they have been found. near an infected person, said the Minister of Health. and Welfare Chen Shih-chung (陳時中), who leads the CECC.

The app, first introduced in May last year, was developed by artificial intelligence center and developer Taiwan AI Labs.

Chen said about 6 million people have downloaded the app, which is available for Apple iOS and Android devices for free.

The CECC hopes the number of users will increase to more than 12 million, Chen said, adding that widespread use of the app would greatly help in tracing contacts of cases who visited mass events. 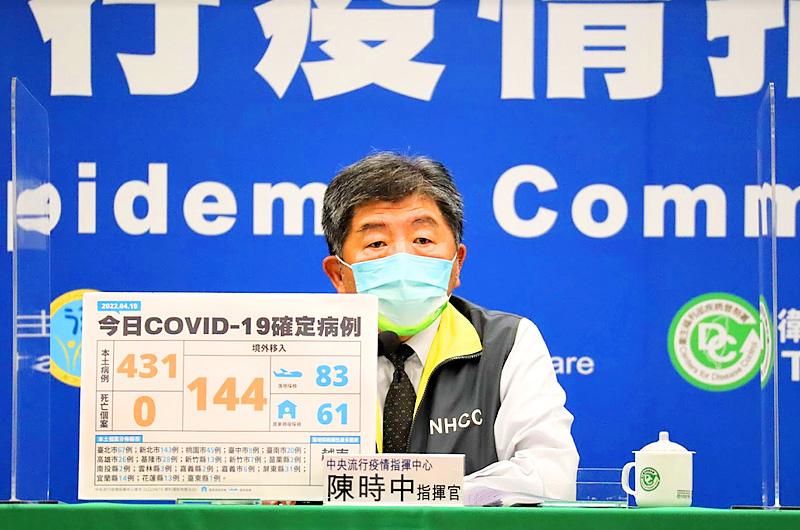 Chen said the daily case count may continue to climb as fewer COVID-19 tests were conducted over the weekend.

Yesterday’s nationwide cases were spread across 18 cities and counties, with New Taipei City reporting the highest number, 143, followed by Taipei with 67 and Taoyuan with 45, according to CECC data.

Of the 3,546 national COVID-19 cases reported nationwide from Jan. 1 to Saturday, 12 had moderate symptoms and two had severe symptoms, while the rest had mild or no symptoms, the deputy director general said. from the Centers for Disease Control, Philip Lo (羅一鈞), deputy chief of CECC’s Medical Response Division.

The four new cases with moderate symptoms were two men in their 60s and 80s who received three doses of a COVID-19 vaccine, a man in his 60s who received two doses, and a woman in her 50s who did not. is not vaccinated, Lo said.

All four cases are hospitalized with pneumonia, with some having reduced blood oxygen levels, Lo said.

The CECC defines severe cases as those with acute respiratory distress syndrome or septic shock, or those being treated in intensive care units for any symptoms of COVID-19, Lo said.

Those with mild pneumonia or blood oxygen levels below 95% are classified as moderate cases, he said.

With no deaths reported yesterday, the number of confirmed COVID-19 deaths in the country remained at 854.

Comments will be moderated. Keep comments relevant to the article. Remarks containing abusive and obscene language, personal attacks of any kind or promotion will be removed and the user banned. The final decision will be at the discretion of The Taipei Times.