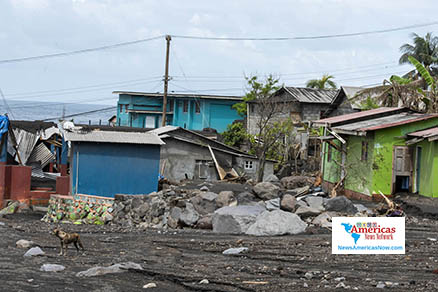 Americas News, KINGSTOWN, Saint-Vincent, Tue June 1, 2021: While the government of Saint Vincent and the Grenadines has reiterated that areas of the country’s red zone affected by the La Soufrière volcano on April 9, 2021 remain banned, displaced residents leaving the shelters are now worried about their survival.

The Red Zone areas lie to the northeast and northwest of St. Vincent and include communities like Owia, Orange Hill, Overland, Georgetown, and Sandy Bay, which are closest to the volcano and made up a large portion of the agricultural zone of the country.

Roger Meirs told News Americas he didn’t have a job and his property in the Red Zone was cracked and unstable.

“There is nothing to come back to. There is nothing to do, ”he said. “I have two children with me and my wife and I can’t work there someday, I can’t cultivate, nothing. If I eat, I eat the dust because when the wind blows it blows all the dust on you, ”Meirs said.

Veronica Hoyte also faces the same situation. “We can’t find a job there at the moment. The farm is destroyed. We can no longer cultivate. What are you going to do? She asked.

Mathew, another displaced resident of the Red Zone, is also unsure how he will survive.

“I don’t know how we survive, because we have nothing to survive on,” he told NANN.

Montgomery Daniel, the country’s Deputy Prime Minister reaffirmed that the red zone remains closed, but people have been allowed to return to clean their homes to care for their animals.

The UWI seismic unit says the La Soufrière volcano continues to be in a state of turmoil and escalation of activity may still occur with little to no warning. Additionally, scientists say they have discovered “thermal anomalies” that indicate there is a heat source in the crater and most likely originate from a small body of magma remaining near the bottom of Summit Crater. The volcano remains at the ORANGE alert level.

The La Soufrière volcano erupted explosively on Friday April 9, forcing many to leave their homes in the red and orange zones, rendering those areas off-limits, however, authorities are now giving many of them the green light to return home. them. .

Displaced people from the red and orange zones were given until May 31st register with NEMO for humanitarian support.

Invest in the Caribbean + The Ritzury Group is always raising funds to help now sponsor a family, sponsor a farmer, or sponsor a small business owner as they attempt to relocate. Please help by logging into the Saint Vincent volcano disaster relief on GoFundMe or https://gofund.me/7231b33f

They never left the red zone

Faces of the displaced in Saint-Vincent

Inside the devastation in Saint-Vincent

A view from the damaged Owia volcano

Eruption of the Saint Vincent volcano in pictures

Close-up of the destruction caused by the volcano

Grand Bahama wary of the budget as a “ political ” tool