TikTok has not only been a platform for trendy dance videos and high stakes challenges, it has become a tool of creative expression for artists around the world. For Erica Allen-Lubman, aka indie pop-rock artist Boy Jr., the popular app has helped her reach thousands of new fans and subscribers. 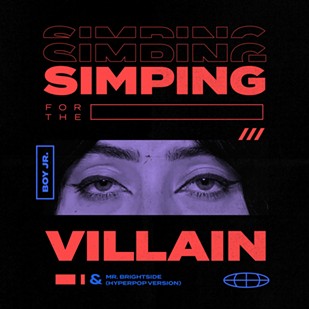 Her most popular videos include creative song mashups, as well as comedic musical compositions about her personal life experiences. One of her videos, released in September, recounted navigating a tough breakup through song and racked up over 1.5 million views. Allen-Lubman has become very adept at using the platform to his advantage, guiding fans to listen to longer versions of his songs by subscribing to his Patreon, an app that provides users with exclusive artist content.

On September 30, Boy Jr. released two full tracks based on his viral TikTok posts from last summer. The first single, “Simping for the Villain”, is an original piece in which Allen-Lubman comically discusses falling in love with a story’s antagonist. The second song, “Hyperpop Mr. Brightside”, is self-explanatory – it’s a hyperpop version of the 2003 single from The Killers.

On “Simping for the Villain” robotic synths are heard alongside a punchy bassline and distorted guitars. Allen-Lubman’s voice enters the equation with a tone and phrasing reminiscent of that of avant-garde independent rocker St. Vincent.


The lyrical content is light enough to put a smirk on the listener’s face. Allen-Lubman playfully pontificates on reasoning for his attraction to the antihero, singing, “I don’t know what motivates me about those with malicious intent / Or maybe it is just the character design? ” As the song ends at just over two minutes, she exercises her guitar skills with a solo worthy of The Strokes or Arcade Fire.

“Mr. Brightside (Hyperpop Version)” is a prime example of the very popular versions of songs Allen-Lubman covered on her TikTok. On this track, she distorts her voice with automatic tuning, creating a sound similar to that of the TikTok. Early mall pop artists. The tempo is sped up from The Killers original, converting “Mr. Brightside “from a melancholy break-up song to a clubbing anthem.


Allen-Lubman continues to update his TikTok subscribers daily with new mashups and original music, with a second full album slated for December. Until then, “Simping for the Villain” and “Mr. Brightside (Hyperpop Version)” serves as a preview of what’s to come – and a great excuse to throw a private 2000s-themed dance party with your kids. best friends.

Emmarae Stein is a freelance writer for CITY. Comments on this article can be directed to [email protected]

New area to watch near the Bahamas